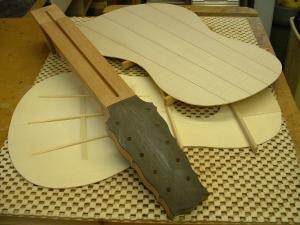 Three years ago Raymond entrusted the restoration of his beloved 1985 Martin Fleeson guitar to me and was pleased with the new lease of life I had been able to restore in it. In 2006 I made a classical guitar for Ray to try and although it did not have quite the range and power he needed, he used it in concert for a few baroque pieces that its 'clarity of line' suited well. Raymond is a recognised expert on music from the baroque period; he is very modest about his knowledge, but I can assure you it is extensive, as I was to find out.

Early in 2007 Ray asked me if I would consider making him a baroque guitar. Interestingly, he wanted an instrument that looked and sounded like a five-course guitar but played like a classical guitar. It had to have a fingerboard of normal scale-length with metal frets, a bridge saddle, and tuning pegs. I realised that it also had to have a re-entrant tuning. So, prepared for a challenge, I accepted the commission and got down to research the initial design. The biggest hurdle was how to make the instrument sound like a baroque guitar.

We started with the strings, which is where any good maker should start; Ray did not want to use gut strings. A few years earlier I had restored a 19th century guitar and had been offered (by Gary Bridgewood of Bridgewood and Neitzert, in London) a new string from the Italian Aquila company made from a material called Nylgut - a modified form of nylon. I obtained a set and passed them on to Ray to try out. He liked the feel and sound so the decision was made. Now I was able to work out the string tensions involved and design the soundboard, bridge and neck. The body-shape evolved from study of guitars of the period; I eventually settled on a shape used by Antonio Stradivari, but 10% larger all round; this gave a reasonable compromise between the differing size of the baroque and classical guitar.

Re-entrant tuning means the strings are not arranged in pitch order: low to high. The reason for this type of tuning becomes clear when you study the original tablature, for the high 5th and 4th courses were used by composers to achieve what Gaspar Sanz referred to as campanellas (little bells), an effect where adjacent notes of scale passages are allowed to overlap.

There is also considerable debate about the pitch of the strings. The practical convention of the period being to tune the highest string (then gut, of course) as tight as possible and tune the other strings to it; although Ray's guitar is designed to be tuned to concert pitch at A = 440.

So that about wraps up three months of research and design. In the construction I used a master grade German spruce for the table, braced with three fan struts and two fine transverse bars, the back and sides are of flamed English sycamore, the back being of five-piece construction with ebony lines. The bindings are simple ebony and the rosette is burr English walnut with Brazilian rosewood taken from the headstock veneers. The neck is of Spanish cedar and the fingerboard African ebony. The tuning pegs, made by Bruce Brook, are English plum.


Raymond says of the guitar

"Roger Williams has done a fantastic job in producing this unorthodox instrument. As with everything he does, making or repairing, the workmanship is second to none. The guitar is a joy to play and the sound is exactly as I hoped it would be. Unfortunately as I have no option other than to play the instrument with right hand nails, I was a little concerned that this may create problems but thankfully this is not the case. I have been interested in the baroque guitar repertory for a good number of years and played a fair amount of it on the modern concert guitar. Unfortunately, bearing in mind the totally different tunings of the two instruments, this can only ever be a compromise. Thanks to Roger Williams I am now able to play the music as originally intended."

There is a gallery of photographs of this guitar here