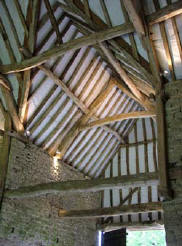 A NEW concert venue in the Cotswolds is attracting some of the top names in classical music.

The Old Barn at Barton Farm, Upper Siddington, held its first concert in November 2007 and has since staged a specially selected number of candlelit concerts, including fundraisers and performances from Cotswolds Early Music Festival.

Set in 60 acres of pasture and woodland, the historic cruciform barn - estimated to date back further than the 18th century - underwent a major renovation by owners Paul and Ana Gifford-Nash.

"The barn has been restored to the highest standard for a grade two listed building," Mr Gifford-Nash said.

"We thought it deserved to be given a new lease of life. We just had the building work done, it's the music and people that come to hear it that gives it that life."

What was previously used as a storage facility now seats around 160 people, has a new roof, lighting, a kitchen and large dining area, a green room, toilets, and ample parking.