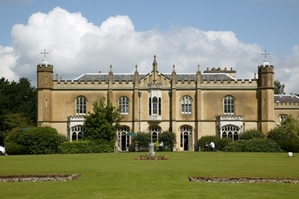 Built in 1133, the Abbey remained a religious house for nearly 400 years. In 1536 however, the Abbey and its grounds were sold to new owners. Missenden Abbey then became a country mansion residence for a succession of families until 1946, when it was sold to Buckinghamshire County Council for use as an adult learning facility.

Following the devastation of a fire in 1985, the gutted interior was restored and renovated, still in keeping with the architecture of the building. This was completed in 1988 and was reopened by HRH the Duke of Gloucester.

Today, you can still see where the flames licked the stained glass windows, completely changing their pattern and hues, making them a truly striking feature of the original building.

The Abbey was bought in the mid 1990’s by Buckinghamshire New University and has remained a training facility ever since.