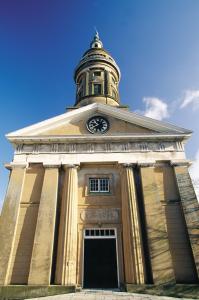 It was at a public meeting on 30 October 1815 that Admiral Sir James Saumarez, later Lord de Saumarez, conceived the idea of building St James.

The church was to provide a place of worship for the British garrison in Guernsey, where services could be held in English. At that time, services in the Town Church were held in French. The building was completed in 1818.

After a full life, which included its use as the Elizabeth College chapel for many years, the building finally became redundant in 1970 and fell into partial decay.

In 1981 The Friends of St James Association was formed to achieve St James' restoration and then to administer the building as a concert and assembly hall. The States agreed to pay for its full restoration in 1983 and the building re-opened in July 1985.

Since that time, St James has provided the island with a unique and versatile venue for concerts and public events covering a broad range of tastes for both residents and visitors.

In early 2002, the Dorey Centre opened after a fifteen month building period and years of fund raising by the Friends of St James Association. The resulting three-storey annexe now houses a reception and box office, four function rooms, bar and café as well as the prestigious Guernsey Tapestry.