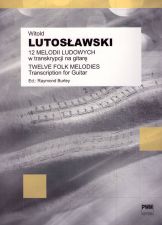 Several years ago the English guitarist Julian Bream made an arrangement of the pieces and apparently consulted the composer before performing his edition; the arrangement remains unpublished. Many years ago I arranged a handful of the pieces for the guitar and more recently was encouraged to complete the set. I felt it necessary to relocate some of the pieces to more accommodating keys; one or two further alterations were required in order to present the pieces convincingly on the guitar. However, there is nothing that dilutes the original material or compromises the composer's intentions.
Polskie Wydawnictwo Muzyczne SA
al. Krasinskiego 11a, 31-111 Krakow, Poland.
www.pwm.com.pl