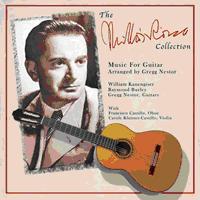 THE MIKLÓS RÓZSA COLLECTION: MUSIC FOR GUITAR presents the music of Miklós Rózsa in an entirely new light, adapting the pieces for two guitars, in arrangements based faithfully on the composer's original scores by internationally acclaimed guitarist Gregg Nestor. The collection contains selections from EL CID, THAT HAMILTON WOMAN, YOUNG BESS, MADAME BOVARY, A WOMAN'S VENGEANCE, PROVIDENCE, BLOOD ON THE SUN, GREEN FIRE, MOONFLEET, TIP ON A DEAD JOCKEY, LYDIA and CRISIS. In addition to selections from Rózsa's large filmography, this release contains two classical works, Kaleidoscope, Op. 19c, composed for his children in 1946 and his Sonata For Guitar, Op. 42, composed in 1986.

Born in Budapest, Hungary in 1907, composer Miklós Rózsa studied the violin from the age of 5. While living in London in 1935, Rózsa was hired by legendary producer Alexander Korda to score his film, KNIGHT WITHOUT ARMOR. Later, while composing the music for another Korda production, THE THIEF OF BAGDAD, Rózsa moved to California, where he remained for the rest of his life. Throughout his film career, he worked in many genres but distinguished himself writing music for the film noirs of the 1940's and the great costume epics of the 1950's and 1960's. A classically trained composer, Rózsa was well known for his dedication to researching the musical history of the time periods of the films he worked on. His filmography includes music composed for films such as THE THIEF OF BAGDAD, THE JUNGLE BOOK, DOUBLE INDEMNITY, SPELLBOUND, THE LOST WEEKEND, QUO VADIS, IVANHOE, JULIUS CAESAR, KNIGHTS OF THE ROUND TABLE, BEN-HUR, KING OF KINGS, EL CID, THE PRIVATE LIFE OF SHERLOCK HOLMES, THE GOLDEN VOYAGE OF SINBAD and TIME AFTER TIME, among others.

Gregg Nestor has built a strong following for his abilities as soloist, accompanist and arranger. He has recorded and broadcast in Holland, Belgium, Spain and for the BBC in London. Many works arranged by Gregg for solo/duo guitars or with various ensembles have been published.

For THE MIKLÓS RÓZSA COLLECTION: MUSIC FOR GUITAR, Gregg was allowed access to the composer's personal archives. The results are arrangements as concise and accurate as possible to the composer's original intentions.

William Kanengiser is known worldwide for his talents as a soloist and chamber musician. Also known for his expertise as an arranger, William has transcribed extensively for the Los Angeles Guitar Quartet.

THE MIKLÓS RÓZSA COLLECTION: MUSIC FOR GUITAR is a limited edition release of 1000 units. The first 100 copies purchased through BUYSOUNDTRAX will be autographed by Artist Gregg Nestor.


Review taken from 'Music From the Movies' magazine (USA)

Stripping an orchestral piece of music right down to its bare essentials and re-casting the voices could be seen as sacrilege by some. The music of Georges Delerue has been re-interpreted in various guises a number of times in recent years, and quite successfully so; now it's the turn of another late great composer, Miklós Rózsa. Here BSX Records present selections from some of the Hungarian maestro's most famous film scores, but re-arranged for guitar.

While his major epics required something of a bombastic approach, the composer was equally well known for the stark quality of many of his compositions. With that in mind it is perhaps fitting to scale some of these pieces right down to a single instrument, or indeed three as the guitar is joined in places by oboe and violin. Gregg Nestor performs and arranges, along with fellow guitarists Raymond Burley and William Kanengiser, while Francisco Castillo and Carole Kleiser-Castillo provide the oboe and violin lines respectively. Nestor was responsible for getting Rózsa to finally write a piece for the instrument back in 1986, and the resulting 'Sonata for Guitar, Op. 42' provides one of the opening selections on the disc. It's a captivating work and reveals the composer's adeptness – with a little help from Nestor – deftly creating a flowing piece in three movements that would fool you into believing Rózsa had been composing for guitar his entire career. Preceding the 'Sonata' is a wonderful concert work titled 'Kaleidoscope'. Originally prepared for small orchestra, the six musical vignettes work very successfully on guitar and are full of colour, perkiness and charm.

From there we move into film territory and a varied collection of ideas, some of which work better than others. The El Cid selection is a good example as the 'Overture' sounds frankly ridiculous – though the castanet-like fingering in places is clever, while the 'Love Theme' is beautifully done, with the help of the supporting woodwind and strings. The remaining film score examples each work fairly well as they're largely based on rather more restrained and lyrical entries, such as love themes and waltzes. The selection from Madame Bovary ('Le Passpied de Vaubiessard') is a highlight, as is 'The Boat House Waltz' from A Woman's Vengeance and the 'Suite' from Lydia. As with El Cid, the theme from Green Fire and the Crisis 'Suite' are a bit too rambunctious and overplayed, but perhaps that's just a personal preference for softer guitar music over wild flamenco strumming! Of course the latter originally featured two guitars, so it acts as a good album closer.

So all in all the music of Miklós Rózsa is well appointed on the guitar and fans of the composer should find much to enjoy and indeed re-discover on this album. If the guitar is not for you then of course steer clear; however, it really is a pleasant listen on the whole with the non-film music entries being the highlights oddly enough.