4 Parts Guitar - CD out now and video on YouTube 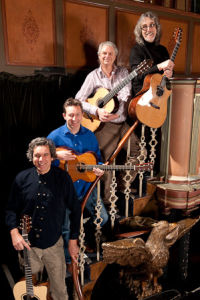 The eagerly awaited 4 Parts Guitar CD of the same name is out now.

See the track listing and listen to some samples HERE
The CD is now available from GuitarCds.

Well, the 4 Parts Guitar tour for this year is now over and, I have to say, I can't wait for the next one. Even though we're living in cash-strapped times it was good see so many capacity crowds even though the tickets were not cheap. The audience response was overwhelming and, judging by the number of CDs sold, there was a genuine interest in our diverse choice of music. It was great to meet a good number of people during the CD signing and to see some old friends that, in some cases, I hadn't seen for many years.

The only disappointment (for us and, I'm sure, for the audiences) was that John Etheridge was unwell and not able to join us for the final three gigs. South Petherton and New Milton Arts Centres were happy to go ahead with 3 Parts Guitar; Colston Hall has been re-scheduled for 27th June. 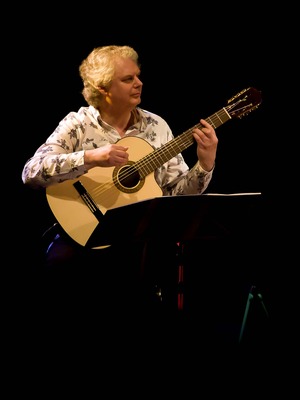 For the 3 Parts Guitar gigs we adjusted the programme slightly; Gordon and I added a couple more duo pieces in the first half - 'Kaz' and 'Tailor Bird' - and Clive joined us for 'Down the River' in the second half. We'd planned just one encore, Gordon's 'The Dodo's Dream' but at New Milton Arts Centre a second encore was needed - we choose to repeat 'Maddie Goes West.

For the first few gigs of the tour I used my trusty Philip Woodfield guitar played through an AKG 414 microphone but after meeting up with the guys at JHS in Leeds I decided to try one of their electro-classical guitars, a Santos Martinez SM650CEA. I have to say it worked like a charm and I had no hesitation in endorsing it.

For me the programme had many highlights, just a few of them: hearing my arrangement of 'The Dodo's Dream' evolve during the tour, playing Clive's fantastic 'Renaissance Suite' with him, and the group version of 'Maddie Goes West' (one of my all-time favourite Giltrap pieces) and daring to play 'Tailor Bird' with Gordon.

It's working with friends (who just happen to be musicians of the highest order) that reminds one of why you choose music as a career. We enjoy making music together, it's fun - on and off the stage - and the spontaneity helps to keep you on your toes. It doesn't get much better than that.

Long may it continue. 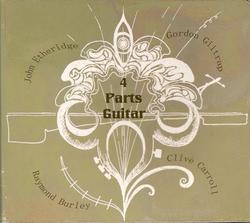 There is a two page interview with Raymond in this months Acoustic Magazine where he talks about Four Parts Guitar. Click the PDF icon at the bottom of the page to see the article.

You can see a taster from the 4 Parts Guitar performance at High Barn on 19th Feb below, filmed by Sue Holton.

It is now confirmed that Three Parts Guitar has become 4 Parts Guitar with the addition of the superb steel string guitarist Clive Carroll.

The tour started at the Playhouse Theatre, Weston Super Mare on 10th Sept, and is reviewed below by Darren Thompson @ GigJunkie and Bob Wilson. More tour dates are being added all the time - please check the Diary for details as there are a lot of dates coming up in March 2011.

The Weston-Super-Mare Playhouse is certainly not Rock’n’Roll, but I was intrigued to see ‘4 Parts Guitar’ nonetheless as I’m a great fan of the instrument in general, and this was alleged to be a master class.

The stage was set very simply for the four musicians on the bill; chairs, mics, and a soft drape hung loosely behind with a soft coloured pattern projected onto it. This understated setup proved a humble backdrop for the evening’s music. The first half of the evening saw four individual and starkly differing performances, rather than the single ensemble I was initially expecting.

First to the stage was Gordon Giltrap, who carried with him both his acoustic guitar and a relaxed aura, softening the audience with self-deprecating quips and a friendly manner. He opened proceedings playing a handful of intensely intricate pieces including his famous, ‘Heartsong’, which was widely known as the BBC’s ‘Holiday Programme’ title piece. I did note that references to his past were at times unusually wistful for someone both brilliantly able and active, but they were not overbearing.

Next to take the stage was classical guitarist Raymond Burley, who’s somewhat formal presence was expertly relieved with a witty comment or two. His enchanting playing sounded as if it had been lifted straight from a bygone century, conjuring both imagery and the atmosphere of a previous era. Much like Giltrap before him, every note was superbly executed, and often intensely complex.

The penultimate guitarist of the shows first half was John Etheridge, who eschewed the emerging pattern of acoustics in favour of his electric guitar. Technically superb, Etheridges’s choices of jazzy and South African composed pieces offered variety, if perhaps being a little too novel for the audience to lock fully into the groove with him.

Finally taking the musical helm was the newest member of ‘4 Parts Guitar’, “young man” Clive Carroll. Dressed unassumingly, Clive made a few last minute tweaks before relaxing into his groove, absolutely captivating the audience to their peak. Playing with a ‘Rodrigo y Gabriela’ style in which every surface of the guitar was utilised and crafted in a host of rarely seen techniques, he played the equivalent of a small band’s output through the one instrument. Tapping the base of the guitar boomed rolling bass, and numerous taps, neck bends and finger tricks created not just music but staggering ambience. He proved impressive, unique and mesmerising – a notable feat after the three previous players high calibre benchmarks. Finishing with his amusingly introduced song ‘Oregon’, he drew every last breath from the crowd as he tied them up in a musical web of percussion-driven magic.

The interlude allowed for reflection on the evening so far – technically incredible guitar playing, surprising variety, if perhaps occasionally a little niche in its content.

The second half of the show drew all four guitarists to the stage at once, each leading proceedings with a brief introduction to their own chosen pieces, before they shared tracks together. Some pieces involved all four members, others were duets, but most importantly all were superb. Their interplay was an assault on the senses – in terms of audio it was difficult to stay on track as rhythms, leads and licks interwove through the air like the smooth threads of audio silk. Visually it was equally challenging as there was so much to see all at once!

A mix of styles returned for the latter part also; a particular favourite of mine was a brief dabble into the Blues which instantly provided the rhythmical fix I had at times craved earlier in the evening. Whilst I could appreciate the technicality and intricacy of the previous pieces, there is little that can connect so instinctively to my musicality than the Blues – this was a welcome addition that had my feet tapping within a second.

Peppered throughout with jokes, banter and fun interactions, the evening ended with an easy informality between the performers and the audience. Combined with the unmistakable talents of ‘4 Parts Guitar’, the humble and appeasing nature with which they presented themselves only endeared them further. Whilst not a gig I recommend watching if you crave mosh pits and Marshall amps, the evening was relaxed, enjoyable and at times hugely absorbing, and for a fan of the guitar, a master class indeed. 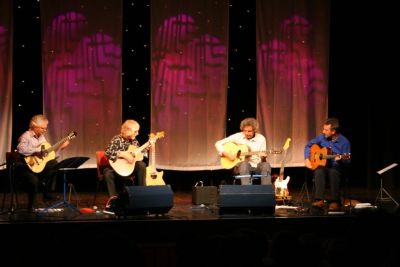 Well, the first of the ‘4 Parts Guitar’ didn’t disappoint. What a pleasure it was to see four brilliant guitarists having such a great time as they played, entertained and amazed us. Gordon, Ray and John were joined by Clive who brought his own unique style to the evening.

The first half consisted of each guitarist playing a few solo pieces in their own style. Gordon started the proceedings with favourites Shining Morn and Heartsong followed by Ray who played three beautiful classical pieces (one Brazilian I think) but by this time I was too into the music to even notice the titles. John then played Stormy Weather and a South African piece on electric guitar (the latter giving the effect of steel drums on guitar – amazing!). Clive was the final guitarist, starting with a Celtic guitar medley and then a piece on a loop station using the percussive guitar technique.

The second half started with all four musicians playing a new version of ‘The Dodo’s Dream’ arranged by Ray. What a great job he did of it too! This is a particular favourite of mine and to arrange for 4 guitarists must have caused Ray a few headaches. He left a couple of places for improvisation which means that even with the four of them playing this piece, it will still evolve and change on each playing. Nice one Ray!

Each guitarist then played pieces of their own with one other guitarist supporting them. Sometimes all four played a Gordon piece and this gave a whole new dimension to Gordon’s composing as some of his pieces lend themselves to improvisation. What guitarist doesn’t enjoy improvising? This showed the skill of these guitarists – all of them able to just fit in with each other, sometimes sight reading, sometimes not, but always with a passion and love that shone through. Several acoustic styles were covered in some way during the night and the friendship of these four was apparent as I don’t think any of them stopped smiling all evening. From the beginning to the encore a very enjoyable first concert by ‘Four Parts Guitar’.  Very hard to pick out a special part of the evening (apart from ‘The Dodo’s Dream’), but as the new boy, I do think the extra dimension of Clive’s playing added to this unique quartet and his ‘Renaissance Piece’ played with Ray was beautiful.