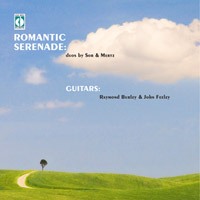 It's just been announced that as from 31st January 2011 Raymond Burley and John Feeley's CD 'Romantic Serenade' is to be the Irish radio station Lyric FM's 'Recording of the Week'.


A new duo guitar CD with Irish guitarist John Feeley entitled 'Romantic Serenade' is out now. It features works by two composers, Fernando Sor (1778-1839) and Johann Kaspar Mertz (1806-1856). The CD will be issued by the San Francisco based record company Con Brio.

The programme is as follows: