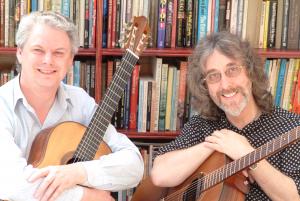 Gordon Giltrap and I recently spent a very pleasant day with our good friend Paul White at his studio in Malvern where we recorded two pieces: Kaz and Tears of Joy. Our Double Vision CD was released in 2006 by Voiceprint and is shortly to be re-released by the German company Hypertension with the title 'Double Vision - Special Edition'; the two new pieces will be included as bonus tracks. The recording will be re-mastered and will have different artwork.

We're very grateful to Rob Ayling at Voiceprint for releasing the Double Vision album but we all now realise that it was a just a little too specialist for their market. Hypertension is the company that released my solo Giltrap album The Long Road Home at the end of last year.