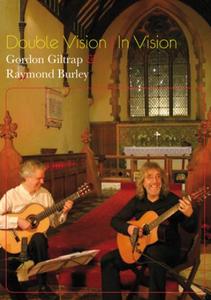 Double Vision - In Vision is a DVD that captures two specially filmed performances of Gordon Giltrap and Raymond Burley. Although both artists have completely different styles they manage to blend both styles together effortlessly in two intimate performances filmed in late 2006 at Stickford Church and Fulston Manor.

Having already recorded an album together in 2004 entitled Double Vision the next logical step was to film these two wonderful artists in concert and two specially arranged concerts were set up in late 2006. Both performances feature the two musicians bringing out the best in each other in this rare coupling.

For more details and to place an order please go to:


Nothing is more beautiful than the sound of the guitar…. save perhaps two"
F.Chopin