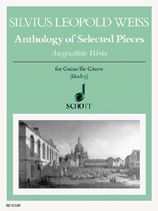 The greater part of the surviving lute music of Silvius Leopold Weiss (1686-1750) is to be found in two autograph manuscript versions now located in the British Library, London, and the Sächsisches Landesbiblioteck, Dresden. The works included in the present anthology are taken exclusively from the London source. Many of the works were originally grouped by common key and it is to be assumed that the composer intended them to be performed as suites. However, it is from the number of unrelated pieces in this source that the present anthology is taken - exceptions being the Ciacona, which belongs to the tenth 'suite', and Pasagaille from the fourteenth. In my opinion the set of eight pieces offered here represents Weiss at his most inspired.

The edition is part of the ABRSM syllabus (grade 7 and 8).